Pandemic 2 is on its way

While the 'elite' flaps about in their private jets and (almost) everyone is hoping that the lockdown will be ended, the bloke that was one of the evil clowns that masterminded the current plandemic circus is already talking about the arrival of pandemic 2 (population reduction by covert bio-warfare), which means that something worse is ahead that also is a contrived event (or he wouldn't be able to predict that it is impending with such a measure of certainty). If the danger of the current pandemic, that obviously is intentionally hyped by the utterly corrupt lamestream media and the 'experts' they stage (see the figures in the image below that don't lie) then there must be a concealed reason why the powers that be would ram such an iniquitous drama down the people's throats. 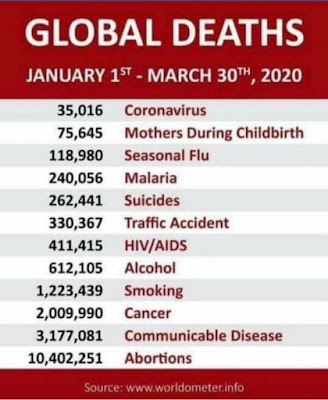 When looking at the consequences of pandemic 1 it becomes clear that a number of things are about to take place:
The question as always is: qui bono? Who profits from this situation? The obvious answer would be: the governments, banks and corporations, but there are of course powers behind them that usually make sure they stay outside of the public eye, because (as is quite obvious from the list above) their agenda doesn't particularly benefit the human race and all other life forms for that matter. Probably the Georgia Guidestones offer part of the reason behind the staged corona play. But the chiseled writings only express the end goal, not the incentive behind it, as the words of Manly P. Hall in the article to which the last link leads, reflect. So, what is the reason that is the deepest secret behind the planned decimation of the human race to which the pandemics merely are the tools to reach the goal?
The mystery schools mentioned by Hall are believed to be a remnants of the Atlantis civilization that was destroyed in one day and a night. What once begun as a seemingly balanced civilization ended as a greed and power hungry society that by its evil intent destroyed itself. Slavery and poverty were never denounced, and such details tend to bite its founders in the ass one time, which they did. The very foundation of a civilization based on dubious values, inherently include its finite nature, because they go against universal law. They willfully ignore the fact that on a subconscious level there is no separation - there are no rich and poor, no privileged and deprived. That is an invention of criminals that break universal law. Such type of rule is destined to be ruled by the cyclical nature of felonious conduct, because the universe favors infinite progress, while separation is the foundation for cyclical misery. Only oneness encompassing the whole that currently is locked away in the subconscious enables infinite progress.
So there are powers, most likely non-human, that intentionally went and go against universal law that have ruled all 'civilizations' that arose and fell in cyclical processes (ruled by the laws of thermodynamics - on a physical and mental level - that they inherently invoked by breaking immutable universal law) because the consciousness of the universe insists on infinite progress and terminates processes that break its laws. Earth is an (imperfect) closed system inside the Van Allen belts, in which the thermodynamic laws to some extent impose cyclicity to processes, including the iniquitous curse of reincarnation. It is a coerced situation. And don't forget, nothing ever is as far out as the truth.

So, what about pandemic 2? I think it will turn on those that invented it. And what occurs on this planet is a mere minute fragment of what is happening in the entire universe that is in a similar predicament as the residents of this world. As above, so below viewed from a different angle, means that out there it is as big a mess as it is down here. But the cycles in closed systems are doomed to be annihilated, as the universe prepares to merge its source and destiny on all timelines, in all dimensions - the creative force that is infinite progress - the death knell of cyclical crime.
Hasta luego online virtual folks.
at May 26, 2020