I am in this dimension because of an administrative error made by a temp angel that couldn't care less about the consequences of his mistakes. Probably the only thing he was interested in was surviving the celestial rat race. You know, as above so below, which implies: the misery we suffer from down here also wrecks the heavens, wherever they may be. If anyone still believes that the dwellers of the upstairs are without flaws, living in a beautiful realm, well..., let me set things straight: they're morons just like us, in deep shit, just like earth's population. Only they have wings and they can do a few magic tricks. Other than that this is pretty much a disorderly, war riddled universe, a crackpot creation that went dreadfully wrong somewhere along the way. 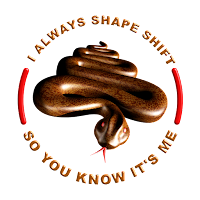 So, now that we have that sorted out, I should probably try to keep a positive mindset and move on to making the best of being here in this bonkers dimension. Involuntarily. First it should be established that the perverse creeps in charge of this sinister circus have no intention to make life comfortable for anyone but themselves. That kind of makes it difficult to avoid doing things that result in amassing bad karma. Still, something very deep inside tells me that all the insane misery that earth and the lower heavens are flooded in, isn't all there is, because that is what positive spirits like me do. The odds are that our suspicion is correct. Statistically. Things rarely go so terribly wrong all the time, even in this botched creation.

Of course there is no proof for what I wrote here, but that is the whole idea conjured by iniquitous powers. It makes it easy to call those with similar hopeful thoughts nutters, which also is part of the plan, meant to shut them up and make them give up. Evil has secrets and relentlessly conspires against all that is good. It does that in an attempt to hide things that are the exact opposite from what it forcefully imposes. Always and everywhere. So that is why I believe that there is something else, something better that isn't pressure moulded into ostensibly inescapable cyclical processes that prevent infinite progress.

The latter, I think, is our inalienable destiny, no matter how out of reach it may seem. For this reason: Never give up hope and stay strong. It is your responsibility as a powerless, abused, plundered, depressed, detuned and intentionally misguided being. Who can stop us?